I am my own woman

We were newlyweds at the Lucknow airport checking in for our flight to New Delhi, onwards to San Francisco — we had been assigned seats a couple of rows away from each other, so we requested to be seated together. The agent refused. “You don’t have the same last names,” he said. 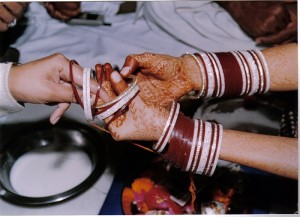 I was still wearing the traditional new bride jewelry (the red and white bangles being the most distinct give-away) and despite repeated attempts at clarifying we were husband and wife and I had opted to retain my maiden name, he wouldn’t budge. Finally he called his supervisor. I, in turn, called my dad, who had come to see us off, to vouch for our matrimonial status.

After half an hour of back and forth, we finally got adjoining seats.

Two years later we made our first trip back as a married couple. During the last leg of the flight, the attendant asked my husband what he wanted to drink. He said, “Coke” and the attendant moved on. I turned to my husband and asked, “What about me?” He gave me a blank look and shrugged. I shouted “excuse me” a couple of times, but apparently it didn’t register. A couple of minutes later, the attendant got my husband and me the same drink.

I don’t drink Coke. So, I said to him — “I didn’t ask for this. In fact, you never asked me what I wanted!” He immediately shot back, “He is your husband. I assumed you’d drink the same thing as him!”

And I was treated like this during our entire stay — we were in Rajasthan for a week and the auto-drivers wouldn’t negotiate with me … they would only talk to my husband. The locals we engaged with would see through me. Some even gave me the look that said loud and clear “Shut up!”

I felt suffocated. And offended. Here in my own country, I had no voice. And I realized that all these years, I had only been my father’s daughter. When he “gave me away” on my wedding day, I became my husband’s wife.

That was all there was. My identity as an individual was determined by whom I belonged to.

For 21 years, my parents had sheltered me from the sexist attitudes of the relatively small town we lived in. The two times I stepped out of the house (once to do a year-long computer course and the second time for my job), I lived in the metros — Delhi and Bombay seemed to treat independent, working women with a tad more respect. Or so I felt in my limited experiences.

But having been exposed to life in the States where I was known for my work, respected for my professionalism, and recognized as “bright young asset” to my team, gender aside, going back in that environment made me realize how good women have it here. Here I have my own identity, my own place, my own voice. Decisions aren’t made for me and people acknowledge me as an individual.

I am valued for who I am, not the family I come from or the guy I married.

And heck, why do I have to be the only one to “belong”? Just as my husband married me, I married him. So, he “owns” me as much me as I own him.

And my name is a big part of my identity, just as his is for him.

I don’t necessarily claim to be a feminist, but it feels demeaning to me to be discounted just because by accident of birth I happen to be a female. I, too, have a place in this world. My place. My status. My identity.

I take pride in being a spirited individual and want to be recognized such. So what if I am a woman?

P.S. I thank my parents and my husband — the former for raising me to be a self-respecting person and the latter for bolstering my confidence.