Our Final Day: 3:30 a.m. We had had a little tipping and speech ceremony before going to bed the previous night, where we expressed our deep appreciation for the porters’ and chef’s hard work in keeping us all safe and extremely well-fed.

Part of the reason for waking up this early was that these 22 unsung heroes needed to catch the 5:30 a.m. “porter train” back to town — their designated, and only, option for transport. Seemed unfair, given that tourists had the luxury to choose a train almost every hour. These guys had to not only cook our breakfast, pack our snacks, and pack their own belongings, but also dismantle all the tents, pack the kitchen and our sleeping bags, and be on their way by 4 a.m. 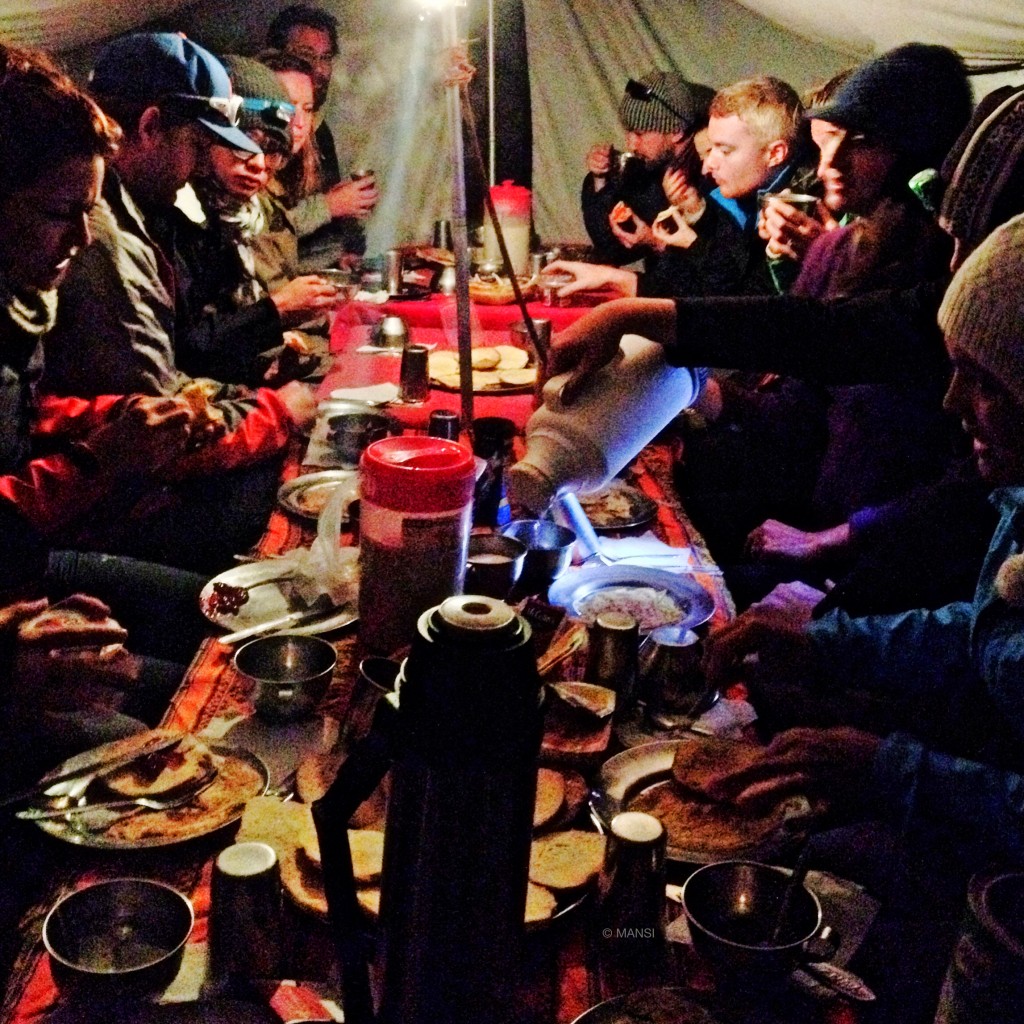 None of us wanted to eat this early — especially since we’d just gorged on dinner. But because the chef had taken the pains to cook us breakfast, we obliged. The campsite was abuzz with activity in what was otherwise a quiet, moonlit part of the jungle. We croaked “Good Morning” to each other. This was the first night when I hadn’t been cold. I must have actually slept all of five hours!

“Buenas noches, amigos,” shouted Roger at 4:10 a.m. Everyone groaned. “Vamanos!” Headlamps on, we walked behind him in a single file. Five minutes later the line came to a halt. We craned our necks. There were two groups ahead of us. We had reached just as all the benches had been occupied! So much for trying to be the first ones at the gate.

We plopped ourselves on the ground. It was going to be a long wait but we had plenty to talk about: the bright star in the sky …was it Venus or the North Star? Someone discovered a little glow-worm who became the topic of conversation for 15 minutes. Like curious kids, we shone our flashlights on the little guy … and then turned them off to see how much brighter it glowed! Then we discussed return flights.

We hadn’t had any time to reflect on our last meal together … in this moment, though, with the cool air biting through our layers of warm clothes, we felt a distinct tinge of sadness. Time had fleeted by us. We had shared so much in the last three days: from the grossness of the toilets to the excitement of spotting a bear and all the pains and aches in our fatigued muscles. We even had internal jokes that wouldn’t make any sense to folks outside the group.

And it had been amazing that since Day 1, we had always stayed together as a group. No trail offs, no laggers, no super-hikers, no judgements (not within the group at least!). It was an unspoken pact: we stick together.

A light came on breaking my reverie. It was 5:30. “This is it!” we said to each other, smiles abounding. Roger had told us it would take two hours from the gate for us to hit Machu Picchu. We knew we’d do it in less.

But only if these two groups ahead of us would budge! It took 20 long minutes before the first ones in our group even reached the gate! And then we ran. Literally.

With Roger leading at a crazy fast pace, all of us sped behind him. The trail was just as uneven as it had been all along. There were steps up and down. In some spots there were sheer drops into the valley thousands of meters below. Most of us couldn’t feel our legs. A lot of us were breathing heavily. Unconcerned, and completely focused, we ran. 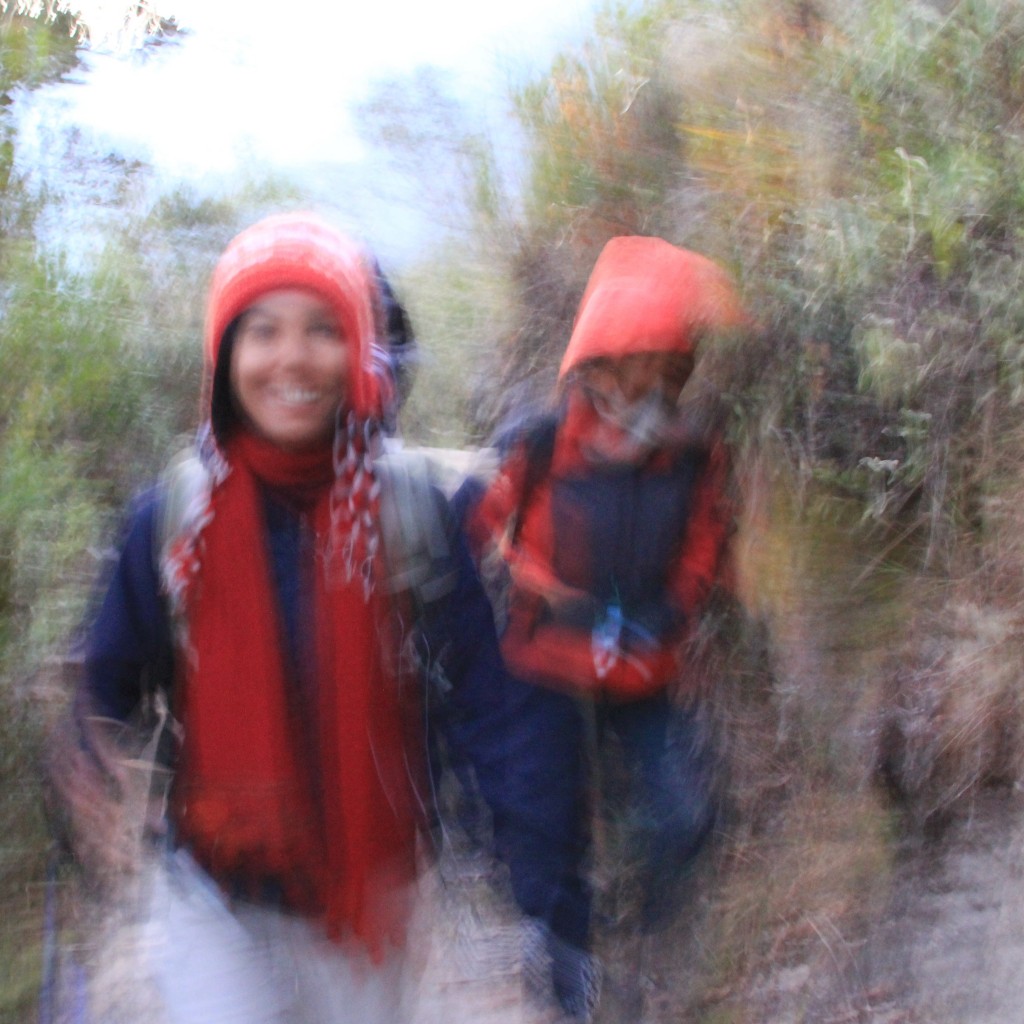 Running the Inca Trail (photo taken with a Canon DSLR)

No one had said it out loud, but we wanted to be the first ones to reach the Sun Gate: the spot from where we’d get our first glimpse of Machu Picchu.

Slowly but surely members of the group ahead of us began to “drop out.” Some stopping to catch their breath, others to take off their jackets, yet others to steal a sip of water. Not us. “Go, go, go, go, go!” I heard myself yelling. “Four more down,” I had a fellow-hiker yell behind me as we passed members from the other groups.

The trail was narrow but there was enough room for the slower groups to have let us pass. But they wouldn’t. “It’s not a race, you know,” someone from the other group said to one of us. “Then let us pass,” our groupie retorted! Burn!

I just loved that about our group … we were sweating hard and our mouths were parched, but we were still going strong. We had passed an entire group … just 10 more people ahead of us. Suddenly, we came upon some really steep steps. Roger shouted, “Hands and feet, guys! Claw your way up!” Without a thought, I handed my walking stick to my husband and like a monkey clambered on to what seemed like a wall with grooves. 50 2-feet high steps, at 70-degree inclination, done in less than a minute!

My heart was pumping faster than it ever has. As I stood up at the summit, I looked behind. The other group was still trying to figure out the best way to navigate the steps. At the Sun Gate, our group was stripping their warm layers off. ALL of us had sped up those steps. Each and every one in our group. High fives went around. And then we saw it. 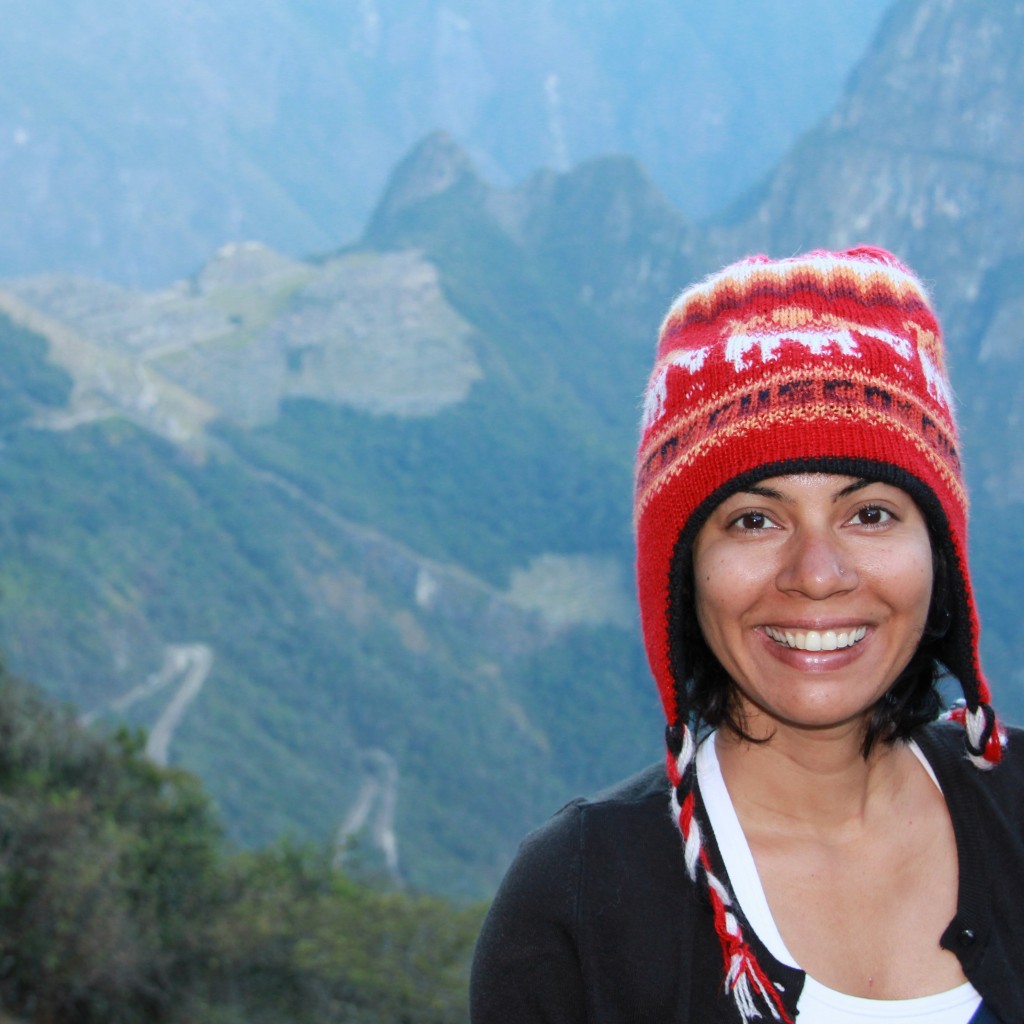 Machu Picchu … the first rays of the sun just beginning to light it up. We admired the view in stunned silence. Then, took some individual and group pictures. “Let’s get going, guys,” we heard Roger. Like well-trained cadets, we grabbed our gear and hopped back on the trail. Within half an hour we were there. We were at Machu Picchu.

I don’t have words to describe what I felt. It was such a National Geographic moment — you know where you’ve seen something over and over on TV, in magazines, as a poster … but here it is, right in front of you, for real.

I had made it.

We had made it! 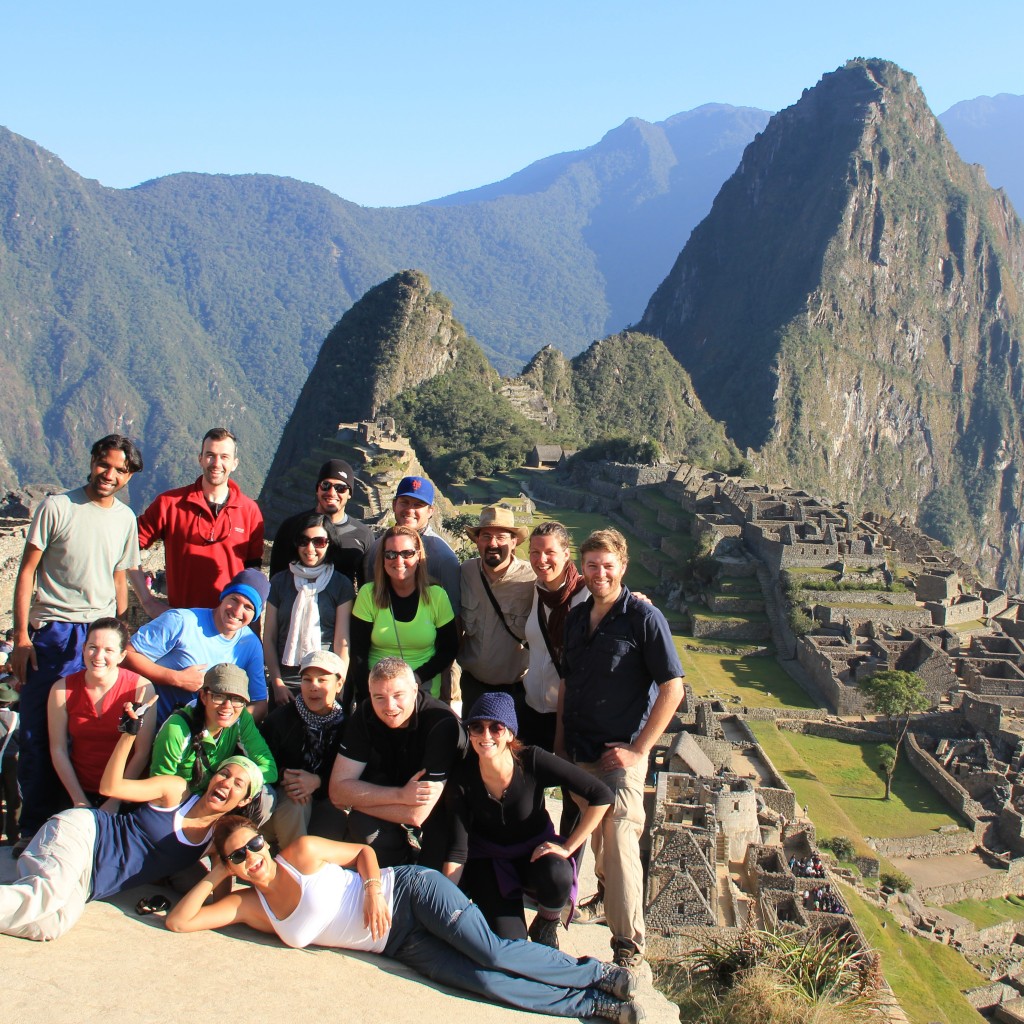 The Sexy Llamas at Machu Picchu!

“Sexy Llamas, you’re the first ones from the Inca Trail to have reached Machu Picchu,” I heard Roger shot. “Yeah, baby!” “Damn right we are!” “Woohooo!” “We kick ass!” were just some of the reactions that followed. Time check: 7 a.m.

We were glowing, beaming, pumped, ecstatic. We looked at the other visitors — those who had taken the “early morning” train to be up here at this time and couldn’t help but smile wider. Nothing could beat that sense of accomplishment.

And the best part was, that each one of us hadn’t just survived the hike … we had all enjoyed it. Thoroughly so.

We were thankful to have had each other’s company. Even those “extra” five that joined us that first morning. Especially those “extra” folks. This trip wouldn’t be half as enjoyable without them. (Side note: we learned, on our penultimate day, that in fact we were the “extra 12″ that joined their private group. There was some miscommunication and despite booking a private tour, they had been lumped in with us.)

We would explore the Inca Site after heading to restrooms and eating our snacks. Right now, it was a celebration of having been on a journey that far surpassed the joy of reaching the destination.