Day 3: 5:30 a.m. We weren’t scheduled to be woken until 6 a.m. but given that we slept all of three hours, even staying in our tent until 5:30 had been a stretch. It froze all night. There was ice covering the our tents … little crystals that look oh-so-pretty in pictures but come with their own set of challenges in real life.

The restrooms at this site were straight out of someone’s horror-club fantasy. But I had learned by now that when one can’t change what is, one adapts. And adapt I did.

A hot cup of coca tea helped wake me up but couldn’t save my fingers from going numb. It was mind-numbing cold. Roger had told us that we’d be passing through a cloud forest today, so we needed to have our rain gear with us. And to dress in layers because we’d be stripping for sure a half-hour before reaching the campsite.

I found this to be the only annoying part of the hike — the “being prepared for all four seasons.” I don’t mean to be a complainer, but it would have been so much easier to just have one weather: moderately cold. That way you welcome the sweaty bits and don’t have to carry all this other stuff!

Trust me, at those elevations, with that kind of rarified air, over a span of four days, you start noticing every extra ounce! 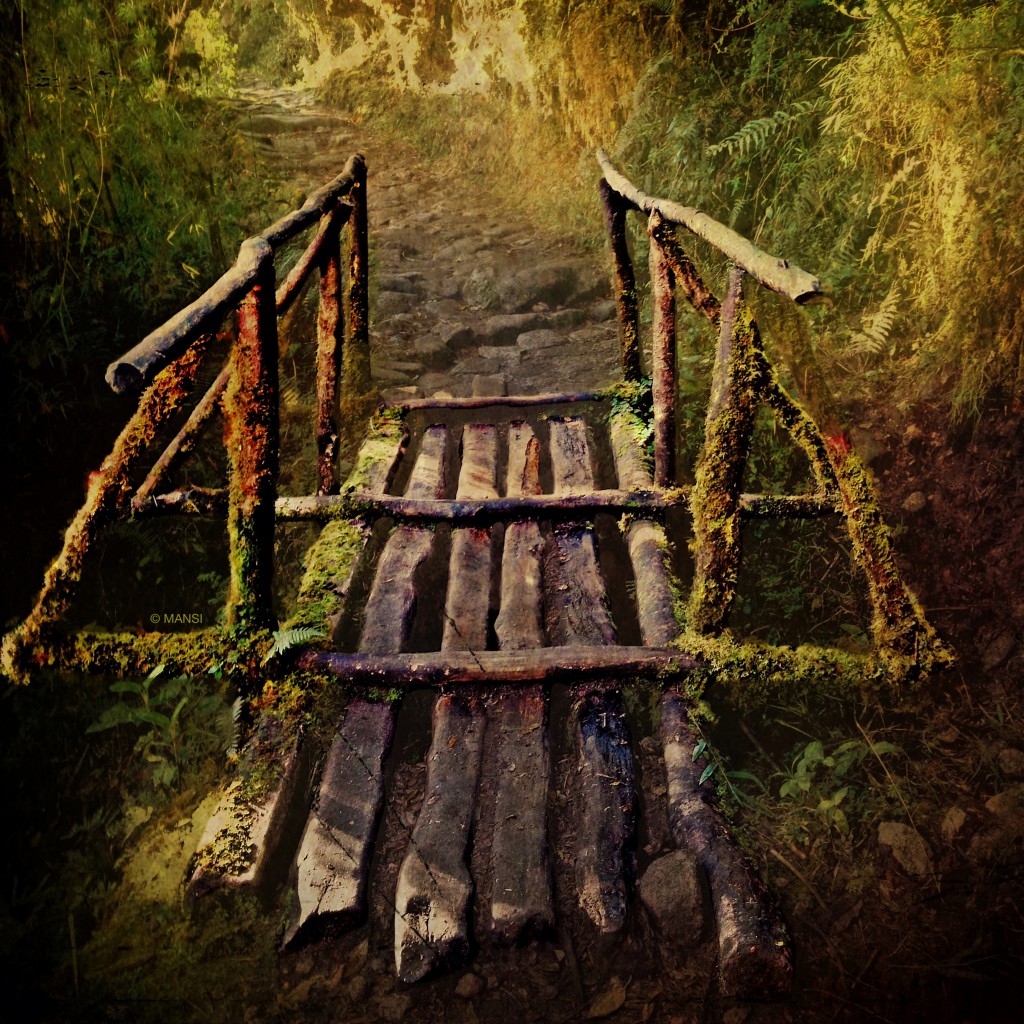 I learned it’s about the journey more, the destination less

I had an omelette, some bread, and hot cooca for breakfast accompanied by an Ibuprofen and Airborne (I wasn’t going to take a chance getting ill the day before reaching our destination!). At 7 a.m. we were all set to embark on what was promised as a “pleasant” half-day hike.

After an initial moderately-steep hike, we got to Puyupatamarca at 12,073 feet offering stunning panoramic views of the valley below. Hever told us we had just started hiking the beginning of the Amazon jungle.

The scenery and the trail were so different from previous days. It felt like we were in another country: different colored moss kissing the mountain side, bamboo trees peeking on to the trail, orchids blooming in crevices … it felt magical.

About an hour into the hike, we hit “the steps.” Since there were reportedly 3,000 of them, I decided I would employ the same technique as Hever and Franco did the previous day: with my right hand intertwined with my husband’s fingers and my left hand holding my walking stick firmly for balance, I walked like there was no tomorrow.

We started at second position and weren’t the last ones to reach the mid-way point. Again, I was cheered by loud applause. “You are doing so well today,” beamed a fellow hiker. “Thank you,” I said. “It’s all in the mind.”

At this point I had begun to believe it.

“Ok guys, only 40 more minutes,” yelled Roger and off we went following the burgundy and white butterflies swimming in the crisp morning air before us. For some reason, my mind was free of all the overwhelming fear, dread and anxiety. I had begun enjoying the hike. And I think that’s what made a world of difference.

I embraced the challenges. And I was determined to overcome any obstacles (literal and figurative) in my path. I would remember the Inca Trail fondly, not regrettably.

“Here we are!” I heard Roger yell. As we craned our necks, we saw the most incredible agricultural site, yet: Intipata, meaning Sunny Slope. The absolutely gorgeous sun-bathed terraces provided an impressive throne from where to look down into the valley below.

Urubamba river appeared like a tiny white ribbon weaving its way through the imposing Andes ruggedness. There were no plazas, religious structures or fortifications here to distract from the basic purpose of the site: agriculture.

I don’t know about the others, but the thought of settling there with my own little vegetable garden seemed rather tempting. 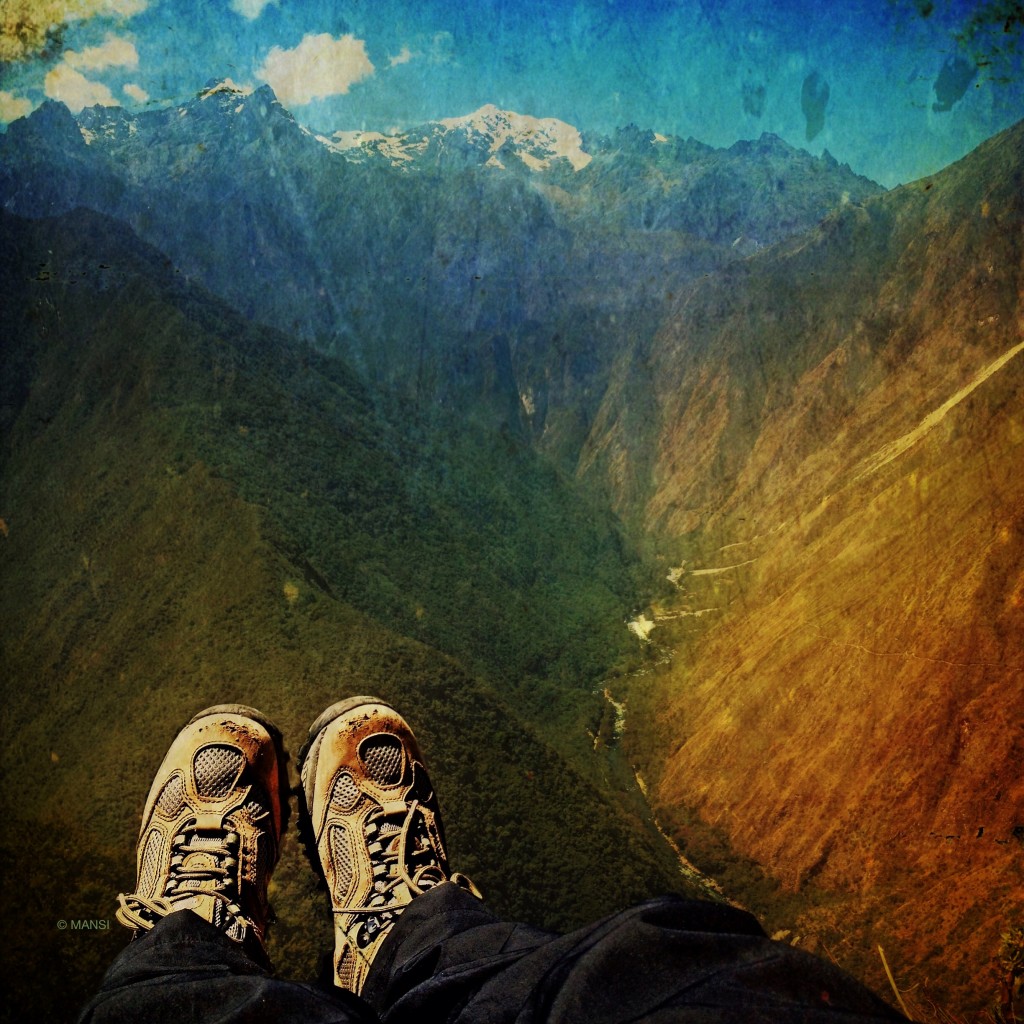 No one wanted to get up even after the leisurely half-hour stop. There was just too much beauty to take in. But our stomachs were growling for food and we could see the Red Army in action just a short distance away. Backpacks on and walking sticks in hand, we started the last half-hour hike of the day.

Perched on what seemed like a terraced campsite, our tents welcomed us for one last rendezvous. But none of us could have napped …  it was HOT!

85 degrees outside; 100 degrees inside the tent. There was no way any of us were subjecting ourselves to third-degree torture. “Would you like to go the waterfall?” asked Roger. “Hell yeah!” we yelled back.

But first, a feast awaited us. 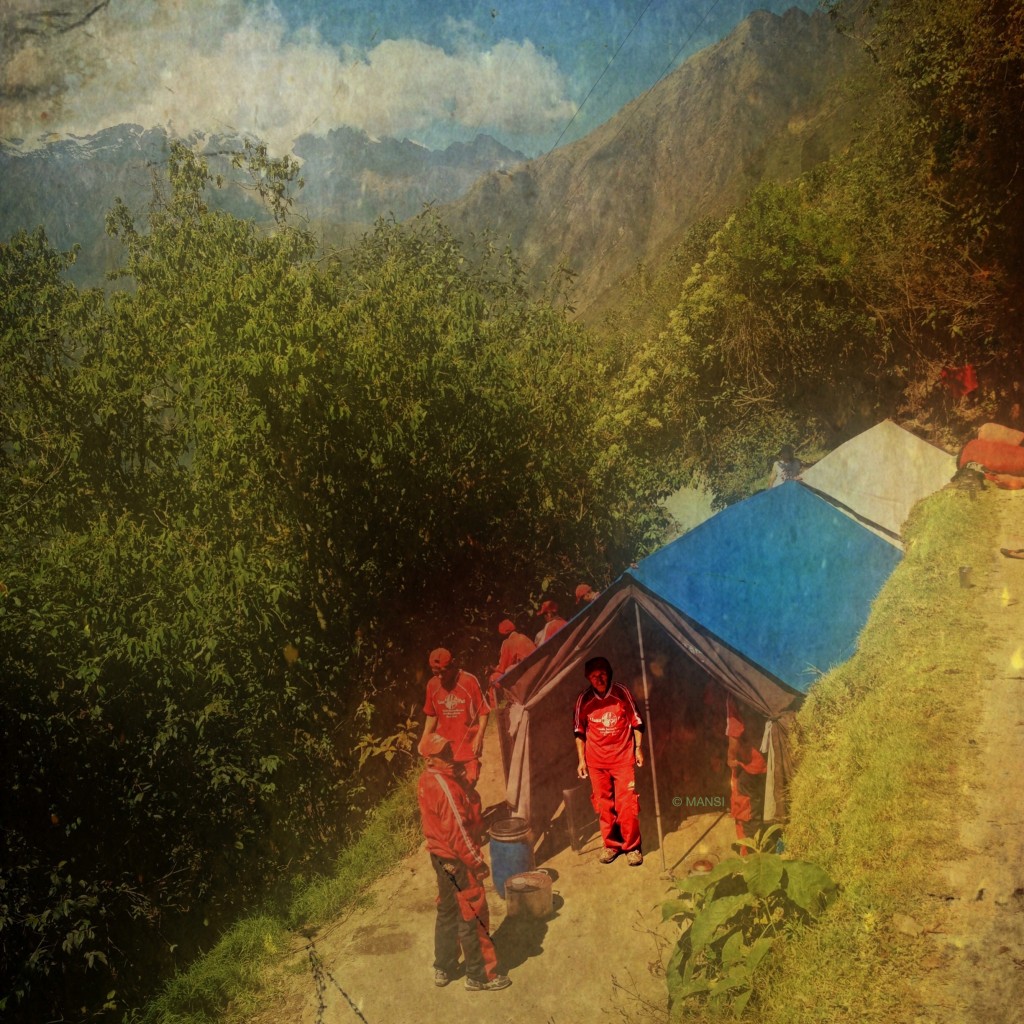 It was our most elaborate meal yet and we savored every single bite.

A half hour after lunch, we were stripped appropriately and ready to hike 20 minutes to the waterfall through Wiñay Wayna (another Inca ruins site). From nowhere clouds had begun appearing in the sky, robbing us of the sweltering heat that had prompted this impromptu hike. But we were determined … no one had taken a shower in three days, so there wasn’t any “rethinking” on our parts.

The “simple” hike involved more steep downhill steps. “Slow and steady,” said Franco (are you used to hearing this phrase yet?).

Who knows why we had expected a gushing, raging, relentless burst of water … the calm cascade seemed a tad underwhelming. The sun had disappeared unannounced and half of us, in our obvious disappointment, gave each other the “this was so not worth it” look. The other half — the yippie half — started stripping into their swimsuits/underwear. 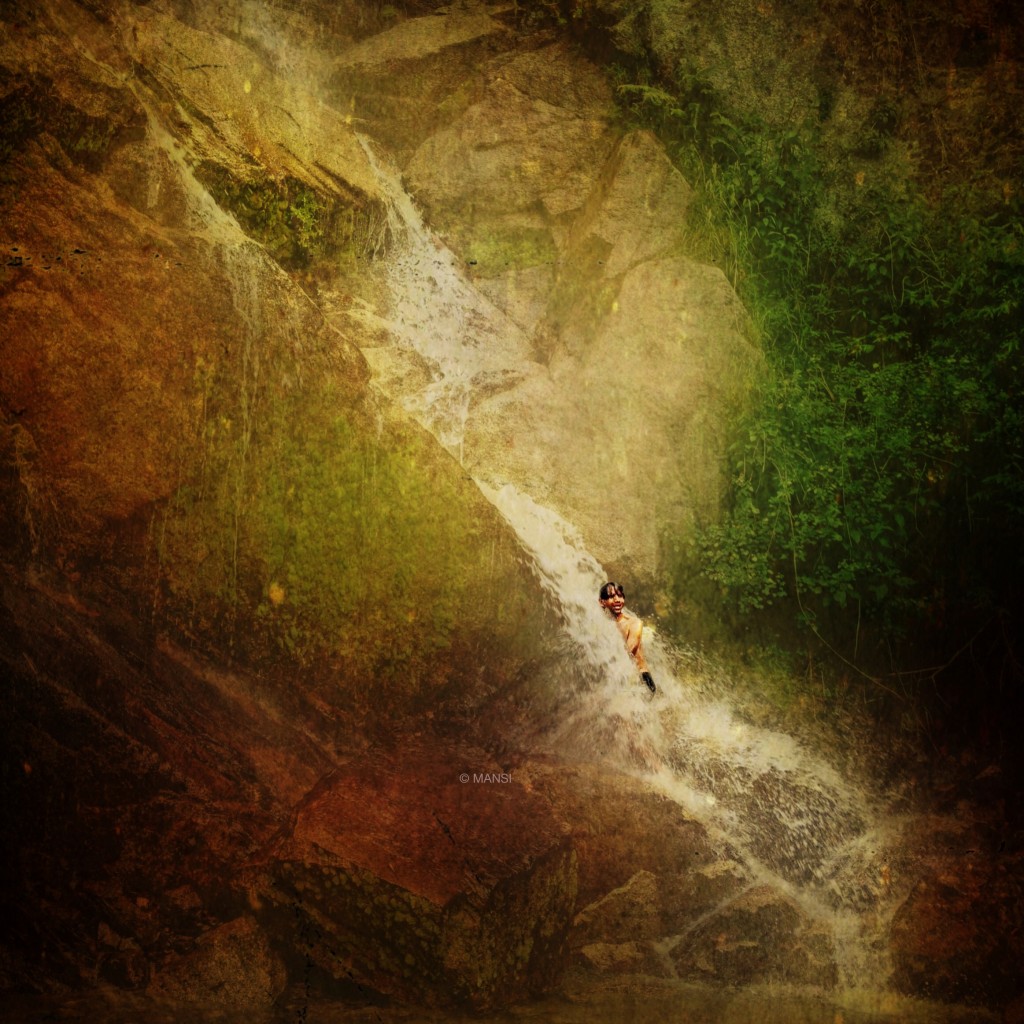 That water must have been freezing! But one by one, half our group braved it. “Refreshing,” was the most common word they used amid chattering teeth.

I wasn’t going in. Tomorrow was the big day and I couldn’t afford to catch a cold. I was content making videos of the squeals, laughter, and consequent shivering.

Suddenly a fellow hiker yelled, “Bear!” Silence fell hard and strong on our group. Everyone was on high alert. Within seconds we saw a young black bear plodding happily down the trail we’d taken to the waterfall. It was so surreal.

It saw us, too, and immediately climbed up a small hill by the trail side. That was a signal to us. Cameras in hand, we rushed to the trail. Click, clickity click we went.

Roger said this was only the third time he had seen a bear in his nine years of hiking the Inca Trail. Franco said it was his second time. That’s all we needed to hear about how lucky we were.

Thrilled we headed back up those steps to stop, this time, at Wiñay Wayna (meaning Forever Young, or as the guides called it: Little Machu Picchu). Overlooking the Urubamba River, this site has even more impressive terraces than Intipata, and consists of upper and lower house complexes, a Sun temple and some awe-inspiring water channels.

Again, how the Incas managed to construct all of this on a steep hillside without modern-day technology was just baffling to the mind.

Franco delving into the history behind the “Forever Young” ruins

We spent approximately half an hour exploring the site before heading back to our tent to pack while there was still daylight.

We were scheduled to wake up at 3:30 a.m., so had to be perfectly ready before going to bed. But there was still time to putting on the nightcap. First, there was happy hour! And today, happy hour was truly happy!

We were celebrating a fellow hiker’s birthday! And the chef had baked not one but two fresh fruit cakes! Unbelievable!

Who would’ve thunk that we’d be having delicious, spongy, moist cake in a tent at 9,000 feet? Not one of us!

Even those of us who weren’t hungry from the “Thanksgiving” feast we’d had a couple of hours ago took large slices of cake.

This was just amazing. 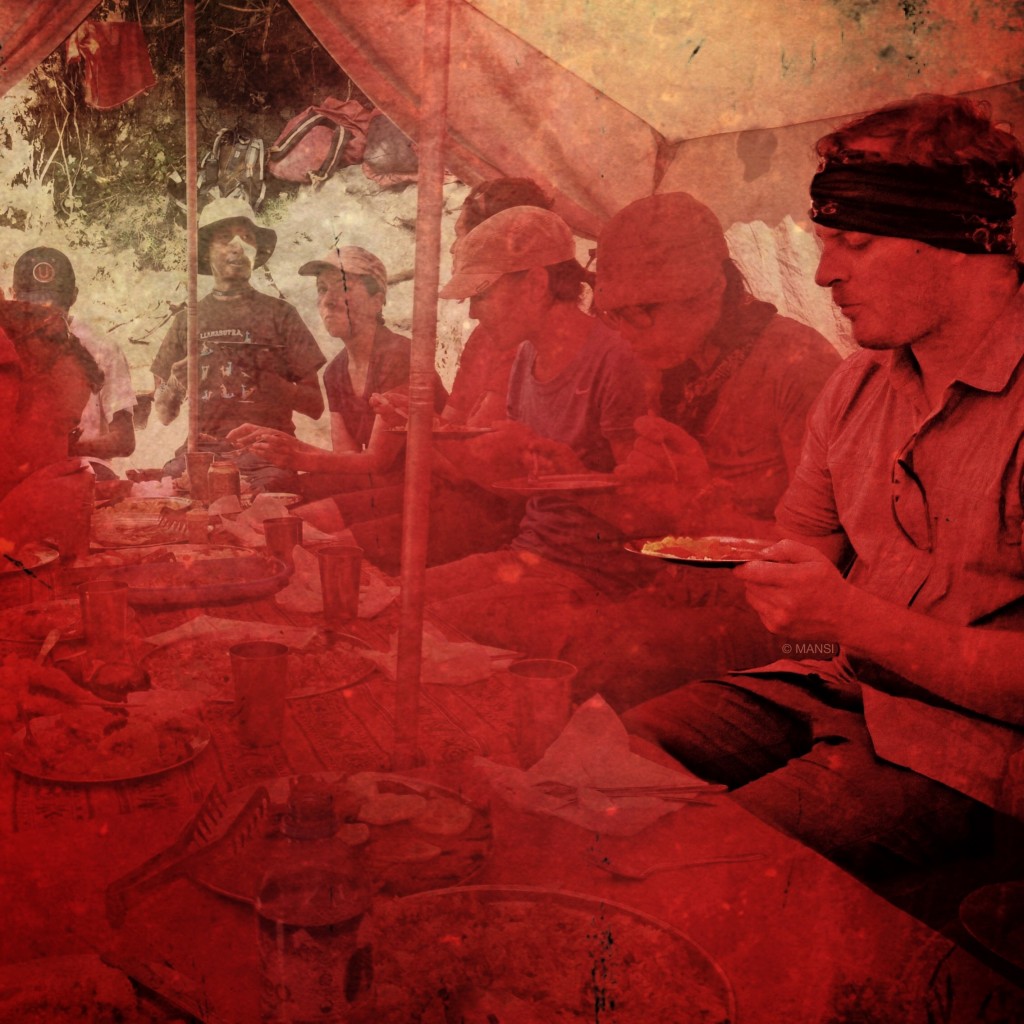 We ate better under this tent than we eat at home!

And an hour of chit-chatting later,  it was time for dinner. No one wanted to eat, nor had capacity for dinner. And yet, the dishes kept coming. All I remember is eating some pasta with spicy red sauce (and all because of that enticing aroma of garlic mixed with red peppers). It was absolutely delicious!

But we weren’t done yet.

For dessert we had some fresh, cold jello! Again, how the chef made that in the middle of nowhere is still a mystery to me. These Inca people sure know how to surprise one with their skills!

Bellies protruding, belts tight we listened to Roger debrief us on what lay ahead. “You’re all going to wake up at 3:30 a.m., eat a quick breakfast and line up at the gate to Machu Picchu,” said Roger informing us of the importance of such an early start. “The gate is only 5 minutes away, but if we’re one of the first groups to arrive, we’ll get to sit on benches!”

This was important because we’d have to wait until 5:30 a.m. before the gate opened and we were allowed into the Machu Picchu area.

We weren’t quite as tired as we were excited tonight. Tomorrow was the reason we were all here.

It would be a really early start, but we hoped and prayed it would be everything we wanted it to be.

The hike culminates. Read all about our last day on the Inca Trail here.