To let: a healthy womb

Two recent cases on surrogate adoptions have had me thinking the last couple of days.

I’ve learned from the experiences of two very close friends that motherhood is almost like a rebirth for a woman.

For the better part of a year, a woman nurtures a new being within her womb – thinking about, speaking to, and bonding with this unseen fusion of sperm and egg … her child. Her flesh and blood. Her own creation.

For nine months, she waits in anticipation for that one moment when she will be able to see her baby, feel the infant’s breath, touch those little fingers – make that connection come alive in a very real sense. That one precious moment that surpasses everything else she has experienced thus far.

And then she has to give it away. To immediately render all that she’s experienced for three-quarters of a year, a memory. To give “her” child to someone else.

Of course, it’s an arrangement she entered knowing full well the implications of the transaction. But did she really know? For a first-time mom, could she have anticipated the emotions she would go through? Could she have guessed what it would really mean to separate herself from her newborn?

I have no maternal inclinations except for the general fact that I like kids — the kind who go back to their parents after two hours of play time. Despite that objective stance, I cannot entertain the thought of giving away “my” child to somebody else.

Difficult doesn’t even begin to describe the emotional toll something like this would take.

Yet some people would rather take this route than consider adoption. As much as it commodifies children.

Most people deep down would rather pass on their genes than adopt as they simply don’t know the background of children they adopt. Plus there are so many tests you have to go through, to prove you are a decent parent, it is enough to put anyone off adoption or fostering. Going for surrogacy suddenly appears appealing in comparison…..

– Naomi Canton, Expat on the Edge 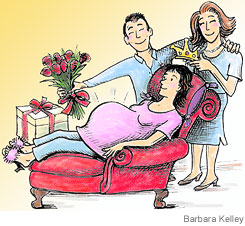 Whether she does it for money or as a gesture of love for a relative or friend, I don’t think any woman can be ever thanked adequately for first nurturing a life and then disowning it.

3 comments for “To let: a healthy womb”