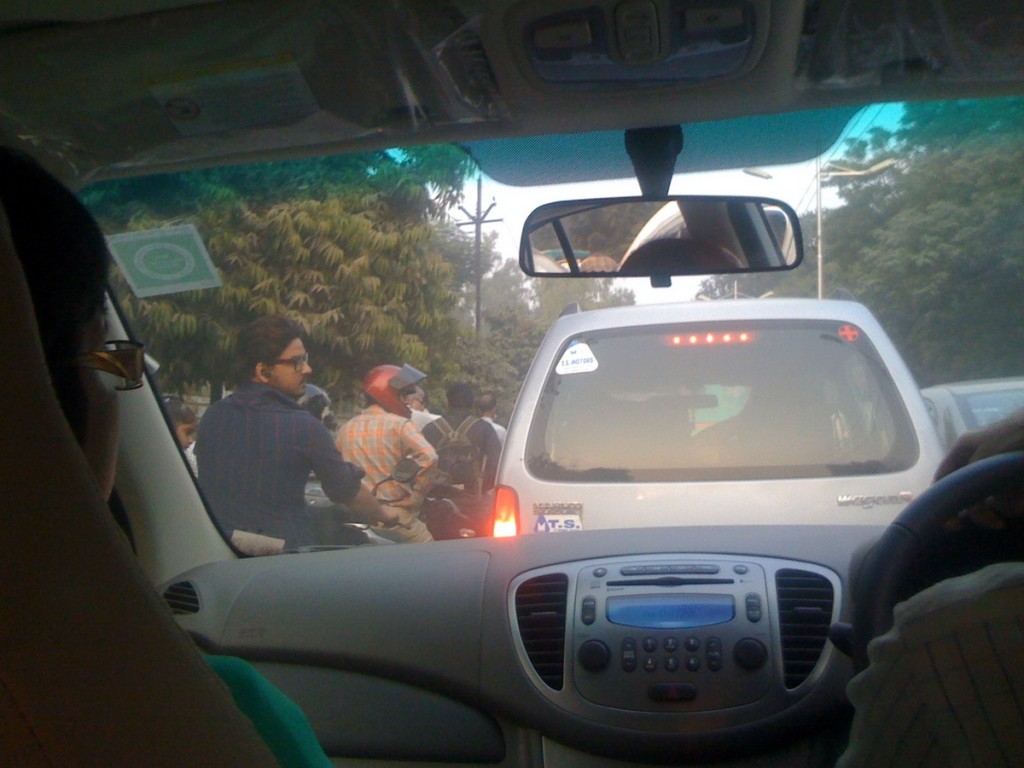 For the first time in two weeks I was able to comfortably lounge in the backseat of my dad’s Honda Civic.

The cyclists who appeared from nowhere ceased to elicit a “watch out, you’ll hit him!” shriek of terror; I stopped cursing the motorcyclists; turned a blind eye toward the rickshaws; and didn’t care about cars being driven so close alongside ours that I could roll down my window and touch them without having to ever so slightly stretch my arm.

Yesterday for the first time I did not cringe when we were stuck in a traffic jam for an hour. I, in fact, made light of the fact that we headed out at 4 p.m. and were back home at 5:30 p.m. without having reached the store we were headed to.

On another shopping expedition last evening (yes, we are resilient), I was almost spat on, my posterior was attacked by a cow’s snout, my arm was swatted by another cow’s tail, and as hard as I tried not to, my shoulders brushed against fellow pedestrians in an attempt to keep up with my parents who effortlessly sashayed through the traffic jam, successfully avoiding vehicles, people, and cow dung.

While everyone continues to acknowledge, and be aggravated by,the traffic issues, it doesn’t stop them from adding to the street chaos. 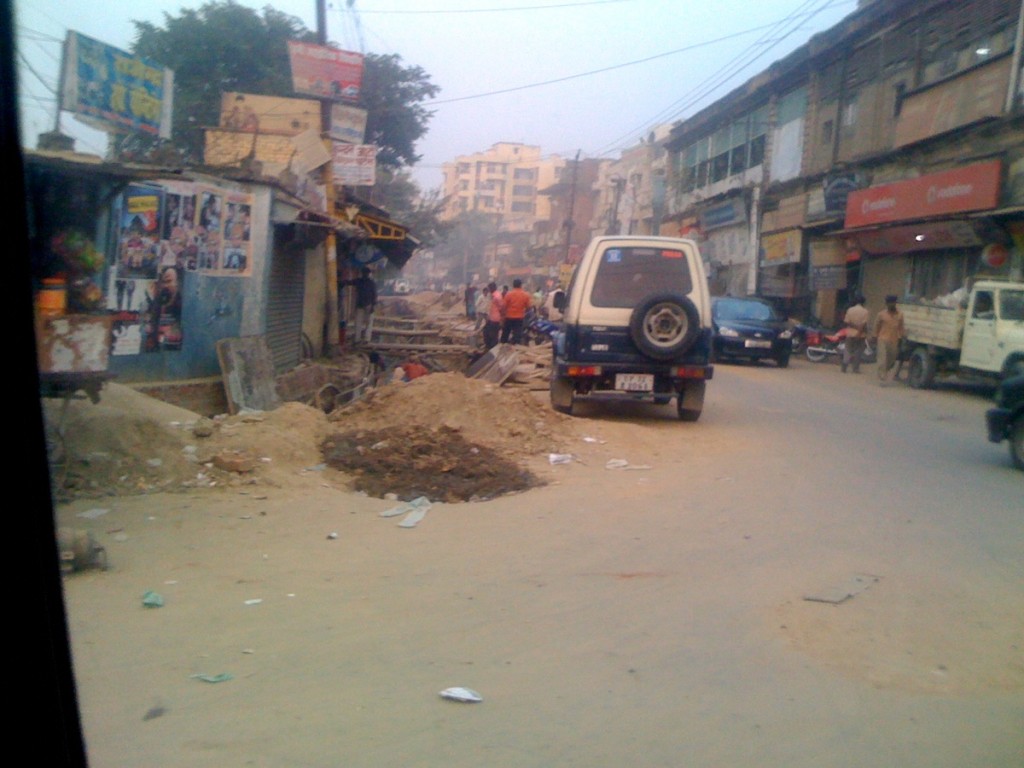 Whether they buy them out of necessity or as a social status symbol, more and more cars are being added to Lucknow’s streets every day.

With 10 lakh (that’s 1 million) registered vehicles on the roads and 200 being added every day, with 300 traffic personnel on the streets instead of the required 6,000, with an average of two vehicles per home in multi-storeyed apartment complexes mushrooming everywhere, with roads being dug everywhere and street side parking constricting already narrow roads, with cyclists, pedestrians, and animals waltzing willy nilly on the streets, with everyone wanting to squeeze in their foot, hoof, or vehicle into any spot they can, the streets in Lucknow city have been transformed into a living hell.

According to an August 2010 report in India Today:

Compared to the mollusc, our cities have super speed records-Bangalore’s peak traffic speed is 18 kmph, while Delhi’s and Mumbai’s are 16 kmph. Indian thoroughfares host over 48 modes of transport, with 40 per cent of commercial vehicles plying illegally. Forty-one percent of streets are taken up by parking. Most Indians drive 10 km on an average daily; one in four spending over 90 minutes every day; 32 percent of the country’s vehicles move on urban roads. India has 50 million two-wheelers and rising. Despite this, national car sales have grown by 38 percent; 2009-10 was the pinnacle with 1.95 million cars sold. The cheapest car in India is about 12 times the annual per capita income of a citizen, while in the U.S. it is about one-third the average income. Urban India’s love affair with the automobile is scandalous: the country’s five mega metros have over 40 lakh cars out of a total vehicular population of 10 crore, its auto market growing by 26 percent last year. India is paralysed by its traffic. 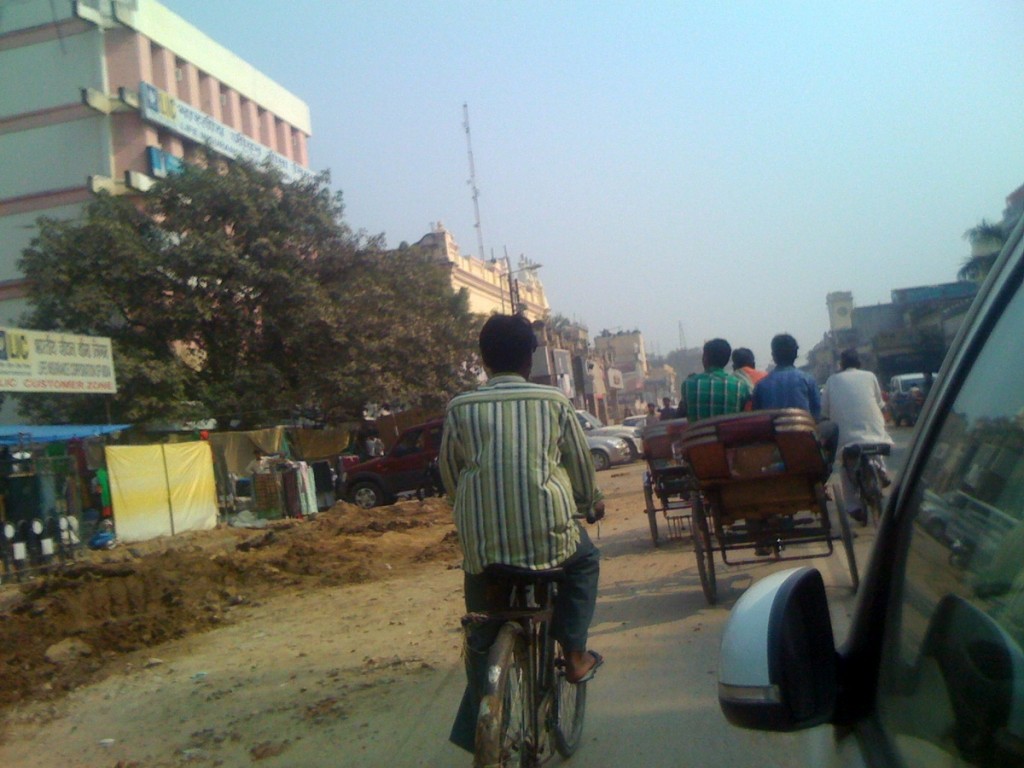 I saw my parents’ relatively calm composure in the midst of all this chaos. The car’s engine was turned off, their necks were craned, they talked about daily “hassles” like these in subdued tones, and as soon as the rickshaw in front moved half a foot, they got excited at the prospect of reaching their destination.

For four years I rode my scooter on these streets, for another four I drove my mom’s car, but now when I look around at the stalled traffic, I can’t imagine sitting in the driver’s seat.

The Lucknow I deftly navigated my way through no longer exists. In eight years, this peaceful Nawabi town has become a metro-wannabe bursting at its seams.

It’s only a matter of time before it explodes.

In the meantime, the “relax, this is India” attitude has rubbed on me. The roads may have come to a standstill, but life goes on.

An edited version of this post also appears on the Santa Clara Mag Blog.